Play two games at once! Work your way up the tech tree and mine diamonds for points, while avoiding trapping yourself with the tetris pieces!

It's kind of a lot. good luck! some random tips: your inventory slots are capped at 10. make sure to craft a furnace! don't die to hunger!

made for day 6 of https://itch.io/jam/vmj2020 following this theme: 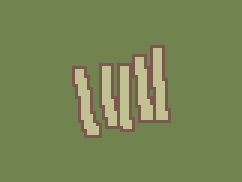 Oh geez, this is a very strange and cool concept! I like the idea of having to be cautious about menuing to either stall the pink blob to move a piece past it or be careful to not accidentally craft something while trying to rotate my current tetromino. It's also pretty funny that it's possible to clear lines that include stuff like furnaces and compressors, effectively wasting the resources used to make it. ;u;

thank you! I think this is game is pretty hard to get into but once you do, I like the various tensions and interactions you run into (like accidentally destroying your furnaces/compressors). glad to hear you enjoyed them too :)

I'm awful at vanilla Tetris so it took me a little while to figure out that bad tetrising wasn't why I was doing so poorly.  I'm still not doing well but once I got past that hang-up and forced myself to play it properly, I got to see all sorts of cool little details. I thought the most striking feature of bakeshoppe was how economical (? feels too highfalutin for what I mean) with the controls and it's so much more potent here.

Just an aside, are there any lose conditions besides starving, getting crushed and stacking too high? I lost one time without any of those happening so I was a bit confused.

oh, that’s a very good point! I hadn’t drawn that parallel myself but yeah you’re absolutely right (re: bakeshoppe).

The original vision for this game was that the controls would be all tied together to trip you up as much as possible (e.g. pressing up/down would craft the current item and close the crafting menu, if you had it open). But then as I got near the end I noticed that the gameplay was good for other reasons, so I scaled the complications back and tried to make the control scheme as nice as possible (while maintaining the arrow-keys-plus-two-buttons restriction). I think it ended up at a good place!

Hmm, I can only think of ~2 other ways to die; I’m guessing it was the second one:

thank you!!! :D I’m really really happy with how it turned out! I keep coming back to try and get a higher diamond score haha

Hi, This is an interesting game.  There are a couple of issues, though.  More than once the coal(?) block spawned right above the pink blob and  it was game over.  Also, I was only able to collect apples and wood.

It sounds like the tutorial messages I put in still don’t make things very clear - sorry about that! I think I’ll make a short explainer video. Thanks for the feedback and for checking my game out!

Ok, thank you for letting me know and you're welcome.  As for the tutorial messages, all I saw was a message that said punch trees.  Is that what you're referring to?

yup. There are more messages later, but you got (understandably) confused before getting to them. 1:30 in particular of https://youtu.be/ou7GMeyokiU might help you get to the rest of the game, if you’re still interested!

Thanks so much for the tutorial video.  It really helped. 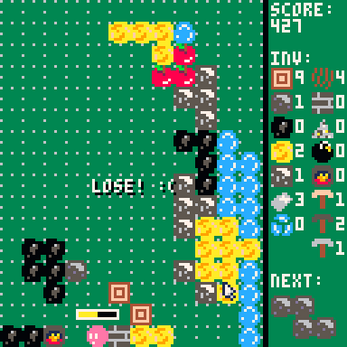 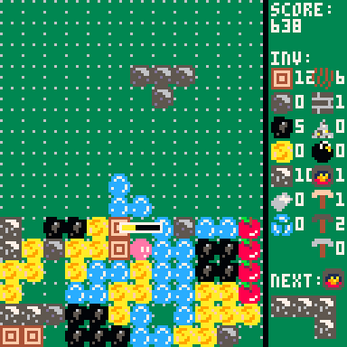 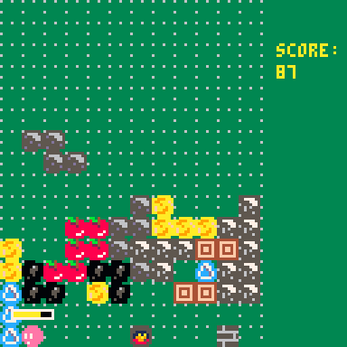